“To understand how everything unfolded with the rescue, you need to first understand elements of Thai culture, customs, and religious life.” (2-question Q&A and giveaway for October 2020) 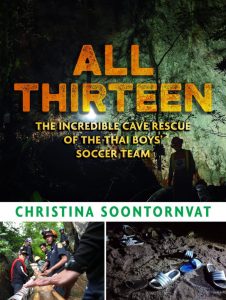 Welcome to the Q&A and giveaway for the October 2020 edition of my Bartography Express newsletter, which you can read here and sign up for here.

My two-question Q&A this month is with my literal—and literary—neighbor here in Austin, Christina Soontornvat. Christina is the author of seven books published in 2020 alone, including two picture books, three chapter books, a novel, and the middle-grade nonfiction title that I’m focusing on today.

All Thirteen: The Incredible Cave Rescue of the Thai Boys’ Soccer Team will be published later this month by Candlewick Press. Christina’s father is from Thailand, and she was visiting family in the country in June 2018 at the time the Wild Boars’ ordeal began. Her father accompanied her on her research trip back to Thailand that October, and several cousins helped out as well.

All Thirteen has received several starred reviews, including one from The Horn Book that praises the “lucid prose written in third-person-present tense [that gives] a heightened sense of immediacy.” The review continues, “Soontornvat gives readers a journalistic account of the difficulty and complexity of the rescue effort. Using interviews and other primary sources, she keeps a tight focus on the unfolding story, with its inherent edge-of-your-seat, heart-in-your-throat drama, adroitly juggling a parade of characters, clearly laying out the technical and engineering challenges, and judiciously parsing out expository information in the occasional sidebar.”

I’m giving away a signed copy of All Thirteen to a Bartography Express subscriber with a US mailing address. If you want that winner to be you, just let me know (in the comments below or by emailing me) before midnight on October 31, and I’ll enter you in the drawing.

In the meantime, please enjoy my two-question Q&A with Christina Soontornvat.

Chris: It’s now been 27 months since the rescue and the worldwide interest that it generated. Before Covid taught us all a great big lesson about patience, choosing not to rush this book to completion must have been a challenging decision. But how would All Thirteen, and your experience in creating it, have been different if you had fast-tracked this book in order to get it out into the world six months or a year earlier?

Christina: Chris, I’m so glad you asked this question. The truth is that I was not patient about the book’s release at all—at first. When we sold the book to Candlewick, my editor made it clear that they don’t rush projects through production, and that we would take our time in creating the book. 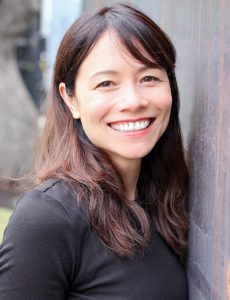 I admit that I was disappointed—I felt that this was a huge cultural moment and if we didn’t put our book out now then we would miss our window for reader interest. Other books about the Thai Cave Rescue were being released so fast—just months after the mission ended. But I quickly realized that I needed the additional time to tell the type of story I wanted to tell.

It allowed me to fly back to Thailand and spend ten days researching, interviewing Thai rescuers, and taking photographs for the book. All that time spent in the area, hanging around the neighborhoods, and sitting in cafés with local people was so important. Even though my family is Thai and I have spent a lot of time traveling the country, the area of Mae Sai (where the rescue took place) is unique. I needed to go there to be able to write about it.

And during that time, good luck smiled on me and I was able to get a very rare audience with the boys of the Wild Boars team, their coach, and their families. Spending time with the boys was probably the most important part of the entire research process because it allowed me to write the story more authentically from their point of view.

The other benefit of taking my time is that additional information about the rescue continued to percolate up to the surface during the months following the rescue. Because we were still in the editing process, I was able to squeeze it in before we went to print. And then of course, all the beautiful photos, illustrations, and maps took time, and I think they really help bring the story to life.

Early reviews of All Thirteen have remarked on how emotional and vivid the story felt. I think it takes time to develop that sort of heart-true emotional connection with your subject matter so that it can come through on the page. I’m so grateful for the journey I was able to take and the people I was able to meet. I would not change a thing about the process!

Chris: The rescue was indeed a “huge cultural moment” in a global sense. But in All Thirteen, you also write about specific elements of Thai culture, and about the roles played by the cultural sensitivity or insensitivity of non-Thai participants in how the rescue unfolded.

What’s one thing about those sorts of cultural intersections that you hope readers will come away from your book with?

Christina: I really believe that in order to understand how everything unfolded with the rescue, you need to first understand elements of Thai culture, customs, and religious life. There were key moments in the mission (such as the decision of how the heck to get the kids out of the cave once they were discovered alive) when communications got pretty tense between the Thai and non-Thai rescuers.

A lot of that tension stemmed from differences in cultural practices and personal expression. For example, in the West it’s considered a show of strength to speak your mind plainly and raise your voice to make yourself heard. In Thailand, that can come across as rude and disrespectful, and raising your voice shows that you have lost control over the situation.

Overall, I think this rescue is an opportunity for young readers to think about how often the Western perspective gets centered, when really there are so many other different ways of doing things. It’s a great example for how important it is to be open-minded and expansive in our thinking, especially if we are going to tackle big problems.

In this case, the international rescuers tackled an unprecedented cave rescue, but I could see this same lesson being applied to other large issues such as climate change or COVID-19.