Ask me anything about All of a Sudden and Forever 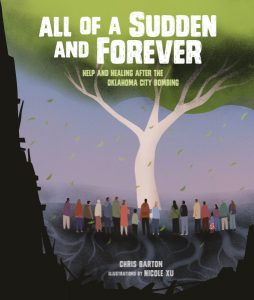 One April morning in Oklahoma City, something terrible happened. A man parked a truck in front of a big building. Inside that truck was a bomb. The bomb exploded. People were hurt. And killed. But that was not the end of the story.

Those who survived—and those who were forever changed—shared their stories and began to heal. Near the site of the bomb blast, an American elm began to heal as well. It grew new leaves. It produced seeds. It offered solace to those in Oklahoma City—and to those around the country and the world looking for ways to recover.

This moving remembrance from award-winning author Chris Barton and debut illustrator Nicole Xu commemorates what was lost and offers hope for the future.

All of a Sudden and Forever: Help and Healing After the Oklahoma City Bombing was published in February 2020 by Carolrhoda Books/Lerner Publishing. There’s lots more information about the book just a click away, but what else would you like to know about it?

Any All of a Sudden and Forever-related who, what, when, where, why, or hows that you’re eager to find out? Just click on “Comment(s)” in the line below, ask me just about anything, and I’ll do my best to answer.