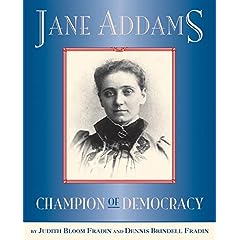 If you want to feel completely inspired or totally inadequate, read the Fradins‘ biography of this indefatigable social reformer from a century ago.

The staid, somber cover doesn’t do justice to Addams, her personal warmth, or her tireless, energetic crusading, but the text more than compensates. The authors make abundantly clear (and with generous source notes) why the Nobel winner and founder of Hull House was among the world’s best known, most admired citizens in her day.

The Fradins, however, go above and beyond by bookending Jane Addams with effective efforts to place her in a modern context. “Today,” their introduction begins, “most people either don’t know who Jane Addams was or have only a vague idea that she was somehow involved in social work.” (Or children’s books, they might have added.)

Nearly 200 pages later, after they’ve succeeded in making Addams unforgettable, they examine conflicting views on how well her most controversial endeavor — the promotion of pacifism, even while the U.S. was at war in 1917-18 — has held up more than 70 years after her death. “[I]f she could come back in 2006,” they write, “is there any doubt that she would organize protests against the war in Iraq?”

The truth is, readers can replace “war in Iraq” with any of many causes, imagine how “J.A.” would approach it (answer: head on), and then wonder why they themselves aren’t doing more.