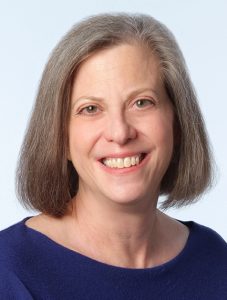 As a measure of how much I delighted in the company of Karen Blumenthal, consider that during my stay at her Dallas home while visiting schools in September 2018, I spent my solo jog through her neighborhood one afternoon listening to a podcast interview with… Karen Blumenthal.

Karen, an immensely talented and accomplished author of nonfiction books for young adults, died suddenly this Monday after a heart attack. She was 61, and she was one of the most generous and gracious people I’ve ever known.

You can read more about the work she did — and the reasons people loved her — in the Dallas Morning News, for which she had been an editor during her long career as a business journalist. Here, I want to tell you about some of my experiences with Karen.

My first book, The Day-Glo Brothers, was in the works but years away from being published when, in a February 2006 blog post entitled “Let me write like that,” I rhapsodized over Karen’s book Let Me Play — The Story of Title IX.

If ever there was a complex topic that needed to be tackled for young readers, this is it. And as I read it, I was fascinated not only by the history and backstory and personalities and ramifications of the topic at hand, but also by Blumenthal’s technical feat of selecting and paring and arranging and organizing the sprawling lot of information that the story required her to incorporate.

I had been studying her book about gender discrimination in sports as I mulled a challenging new topic that I was considering tackling myself. (That “new” topic is one that I have yet to write a book about, but which I still reconsider from time to time, as recently as this past month.) If nothing else, I had the good sense to recognize a good role model when I saw one.

Four years later, that role model sent me an email with the subject line “Congrats!” The message read:

We haven’t met, but I want to throw in my hearty congratulations on the well-deserved Sibert Honor for your Day-Glo book. It’s a great story and I’m going to enjoy sharing it with some young friends.

I’ve followed your blog off and on since you were kind enough to write about one of my books, so I know how hard you’ve worked to bring this story to life. I hope you’re basking in the joy of having it recognized in such a special way. (Let’s also hope that lots of sales follow!)

Good luck with your upcoming book, and I hope we can meet someday and compare the challenges of trying to make it in children’s books.

That turned out to be just the first of many times over the years when I would feel simultaneously lucky and stunned to be in conversation with Karen Blumenthal, to find myself being treated as a peer by someone whom I, a relative neophyte, held in such high admiration.

Karen and I met in person for the first time on October 26, 2011. After a day of school visits, I was supposed to go to her house to watch with her and her husband, Scott McCartney, as the Texas Rangers and St. Louis Cardinals played in Game 6 of the World Series. But the game got rained out, and she and I went out for fried chicken instead.

The change in plans worked out well, though, because in addition to still getting to have dinner with the great Karen Blumenthal, I ended up with a little more time at my hotel in the afternoon to research a new nonfiction story idea that had occurred to me that very day: the invention of the Super Soaker water gun by former NASA scientist Lonnie Johnson. That was a good, good day.

Our paths crossed over the years, a few times (not nearly as many as I would have liked) in person and much more frequently via email. Karen always exhibited such curiosity and enthusiasm about my work, and I can only hope that she picked up from me the fascination and regard with which I held her books.

When we talked during my September 2018 stay about her then-in-progress book about the history of reproductive rights, Karen was puzzling out how to tell that story for young people. I remember the absolute certainty I felt that day about the success she would have in solving those narrative problems. And solve them, she did. When Jane Against the World: Roe v. Wade and the Fight for Reproductive Rights was published earlier this year, The New York Times said Karen’s account “reads, at times, like a legal thriller. … Blumenthal has done her job well: presenting the history, and leaving readers to wrestle with what the future may hold for families facing unwanted pregnancies.”

Kirkus Reviews (“Gripping reading; necessary for every library serving teens” and Booklist (“This essential guide, which gives voices to vulnerable populations, demands to be heard”) both gave the book starred reviews.

Karen and I would have been on a panel together at the Texas Library Association conference this past March, and I would have wanted to be able to talk knowledgeably with her about Jane Against the World. When the conference — and everything else for months at a stretch — was cancelled, I thought I’d have all the time in the world to get around to reading her book and discussing it with her.

But I placed my order only today. My copy is waiting for me to pick it up curbside at BookPeople. I can’t wait to read it, but I ache for that missed opportunity to let Karen know, again, how much I appreciate her work.

She missed no such opportunities.

In our final email exchange a few weeks ago, we talked about our dogs. Karen admired mine (“I think Ernie is a top dog if there ever was one”) as much as I admire hers. I mean, look at this guy: I have an upcoming picture book called How to Make a Book (About My Dog), for which I dutifully researched Ernie’s DNA. When she found out about my book, Karen thought of Franklin. “As you know, he likes picture books. He will want to read Ernie’s.”

I’m glad to know that. Because that book will be dedicated to someone who loved Franklin very much, and who herself was much loved.