Whoosh! and the conversation about race in The New York Times 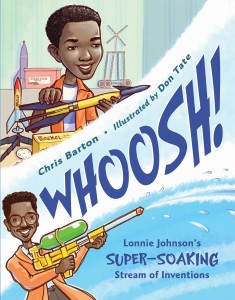 Earlier this week, Whoosh! Lonnie Johnson’s Super-Soaking Stream of Inventions — written by me and illustrated by Don Tate — was mentioned in “These Books Can Help You Explain Racism and Protest to Your Kids,” a column by Jessica Grose in the Parenting section of The New York Times.

In just a moment, I’ll share the context in which our book came up, but first, I want to bring up a previous conversation about race and Whoosh! between me and Alia Jones, a conversation that I shared in its entirety here on Bartography.

That earlier conversation grew from an experience that Alia had as a bookseller. (She’s now a librarian and member of the 2022 Coretta Scott King Book Awards Jury.) I urge to you read it, and — more importantly — I want you to understand the lasting effects of our exchange.

That chat, and Alia’s bringing up what she witnessed in the first place, made a continuing difference in how I talk about Whoosh! with children (and with adults).

When I’m reading Whoosh! to most audiences, I pause at the page where Lonnie Johnson and his classmates compete in a science fair at the then-recently integrated University of Alabama. I take that opportunity to go into additional detail of how desegregation occurred at that institution. Then we’re back to robots, rocket science, and water guns, but not before my audience has a fuller sense of what Lonnie and his team was up against when they won first place.

Now for the relevant section from this week’s New York Times column:

In addition to keeping an open dialogue about racism, a way to raise children who are anti-racist is by making sure your home library has books with black people at the center of their stories. Christine Taylor-Butler, the prolific children’s author and writer of The Lost Tribes Series, said that she got into children’s literature because she wanted to see more stories of black joy. “I want stories about kids in a pumpkin patch, and kids in an art museum,” she said. “Not only do we want our kids to read, but we want white kids to see — we’re not the people you’re afraid of.”

“I see students clamoring for books that speak to heart, not oppression based on civil rights,” Taylor-Butler added. And she is also a fan of books that tell stories of black triumph and invention, like “Whoosh! Lonnie Johnson’s Super-Soaking Stream of Inventions,” by Chris Barton and illustrated by Don Tate, which is about the black engineer behind the Super Soaker water gun.

I’m so glad to have Whoosh! out in our world at this time, and I hope it finds a way into many, many conversations about our history, about black joy, and about black triumph and invention.